Health Tips»Effects Of Pollution On Skin

Effects Of Pollution On Skin 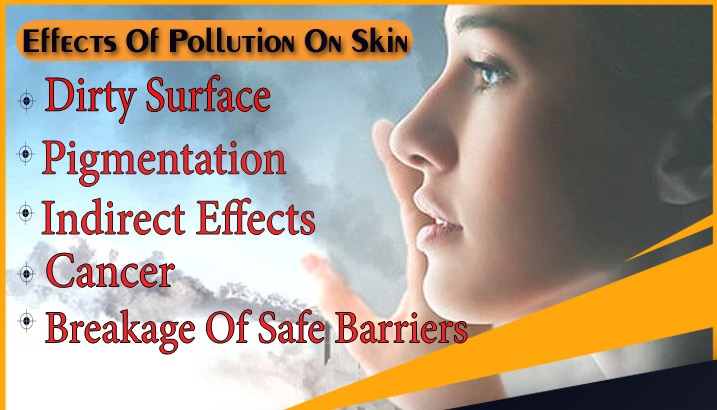 The coronavirus pandemic may have hit us down, but we are still going out to buy our essential requirements. Ever since the unlock phase in the country was introduced, the massive amount of vehicles have restored themselves onto the streets. These vehicles continue to emit smoke just the way they were doing before the lockdown. As such, the pollution levels in the country will become more or less the same as they were before restrictions.

But why are we talking about pollution? Does pollution affect some other parts of our body apart from the lungs? The answer is yes! Pollution primarily affects the skin, and as it turns out, a majority of your skin conditions may be a result of overexposure to some pollutants which continue to harm your skin. Do you want to know more about them? Just scroll over and get reading.

We all live in metropolitan cities either for our education or our work. A majority of us are born in these very cities, and we have seen them change massively over time. As more and more people accumulate, the need for vehicles and newer industries expands. As a result of this, the pollution levels also go up! If one lives in a populated area, then it is rather difficult to escape environmental aggressors such as pollution on a daily basis.

Some forms of air pollution pose the biggest threat to the healthy appearance of your skin. These include automobile and truck exhaust, byproducts from factories, particulate matter, smog and even the smoke from cigarettes. But what causes your skin to deteriorate by the effect of pollution? Let's take a look.

The first and the foremost effect of pollution on the skin is the feeling of dirt on the surface of your skin. If you have driven a two-wheeler behind a bus, then you would have felt it in real-time. The exhaust from big vehicles such as buses emits big particles which accumulate on your skin and make it appear darker. It gives the person a filthy feeling even if they have numerous moisturisers on. This is precisely the reason why everybody is advised to wash their faces before going to sleep and after coming back home from work. It is because if these particles stay on the skin surface for a longer time, then they may also cause some allergic reactions or even inflammation.

Not only does pollution leave the surface of the skin dirty, but some of these chemicals also possess the ability to penetrate deeper into the skin's layers. They eventually cause oxidative stress which results in weakening of skin's barriers and, as such, inflammation is triggered. The causative agents responsible for this oxidative stress include soot, dust, smoke or other particles which are not visible to the naked eye.

The word pigmentation refers to the colour. A lot of studies have found that pollution affects skin pigmentation as well. If your skin is exposed to these pollutants in a high amount without protection, then it can result in issues pertaining to skin pigmentation. You might get an uneven skin tone along with dullness. This will eventually lead to the formation of wrinkles and cause premature skin ageing.

It is also said that if your skin is already suffering from a compromised barrier such as in the case of eczema, then your skin is even more susceptible to the effects of pollution. These sensitive skin types may receive a higher degree of inflammation as compared to normal skin types.

In adverse cases, pollution can also cause specific types of skin cancer. This can be understood by the effect of free radicals that get formed in the skin when the pollution touches it. Free radicals are highly unstable molecules with unpaired electrons. Then these molecules are formed in the skin they bounce off from one place to another to draw an electron from a healthy cell, thereby injuring it in the process.

However, in this case, cell injury is not our only concern. Dermatologists claim that free radicals not only increase inflammation, but they also make acne and rosacea worse than before. Specific adverse effects such as damage to the DNA and a mutation in the cell can directly affect the formation of cancer in the skin.

Apart from the direct effects that are experienced by the skin when pollution hits the surface, there are a few other factors also that need our attention. Man-made pollution also erodes the ozone layer in the atmosphere. The ozone layer shields us from the harmful radiations of the sunlight. When it is not present, we experience even more sun exposure than before. As such, the UV rays also contribute to hyperpigmentation and inflammation. It also increases the chances of us getting sunburns frequently.

Pollution in its various forms not only poses adverse effects on our physiological health, but it is also widely responsible for the way our skin appears. This is why it is always advised to wear protection before stepping outside your houses.