Health Tips»7 Effects of Cigarettes on the Health

7 Effects of Cigarettes on the Health 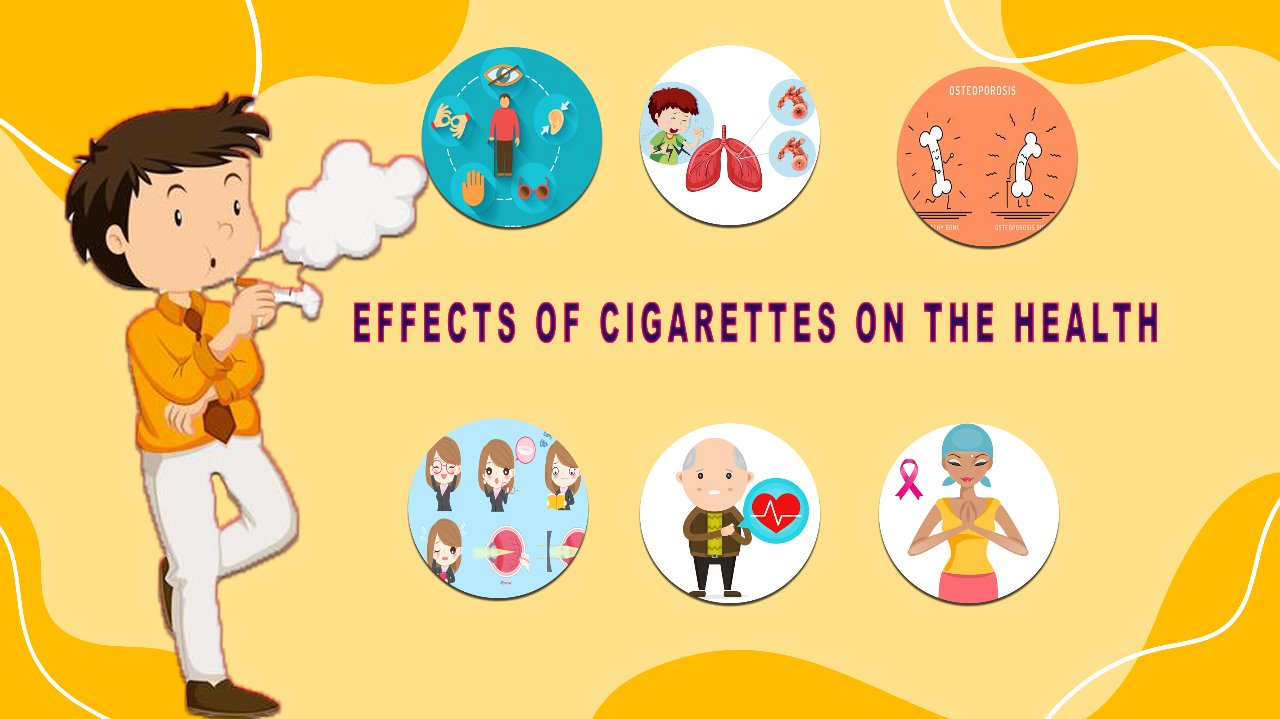 Cigarettes constitute some of the most dangerous objects that people smoke. We say so because smoking causes damage to a variety of organs apart from the lungs. There is a majority of patients who live with dangerous smoke-related illnesses even after getting discharged from the hospital scares. Smoking has the potential to cause cancer, heart diseases, lung diseases such as emphysema and chronic bronchitis, etc. Let us take a look at all of these issues in detail.

There are a plethora of scientific studies in which it has been proved that there is a relationship between smoking and heart disorders. These heart disorders include several types of conditions in which the blood vessels are narrowed. This hampers the capacity of the blood vessels to carry the blood to the heart. Smoking is a significant cause of cardiovascular disorders, and according to reports, it causes one of every four deaths from CVD.

We can say so because smoking raises the triglycerides in the blood and lowers the good cholesterol. It makes the blood sticky, which increases the potential of formation of clots. Smoking has also found to damage the cells which line the blood vessels. It causes the thickening of the sides which narrows these blood vessels.

COPD refers to a bunch of diseases which block the airflow and cause breathing-related problems. COPD includes chronic bronchitis, emphysema and even asthma. If a person has COPD, then the airflow becomes reduced through the airways that lead to the lungs. This might cause a nagging cough, shortness of breath, wheezing and even tightness in your chest.

COPD is a widespread disease related to smoking. According to the Centre for Disease Control, 8 out of 10 people who smoke die of COPD associated deaths. Moreover, smoking that has been begun early in the teenagers also contributes to slower development of lungs which increases the risk of COPD in adulthood.

The most pathetic outcome of smoking is the formation of a tumour. Interestingly, smoking can cause cancer almost anywhere in the entire body.

Cancer is a disease in which abnormal cells begin dividing without control. These cells are also able to invade other tissues and can spread to several parts of the body through blood and lymph vessels. There are more than hundred different types of cancer.

According to experts, smoking causes cancer and then blocks the bodies ability to fight it. The toxins from the smoke weaken the immune system, which makes it hard to kill the cancer cells. As such, the cells keep growing and invading other tissues. Moreover, the toxins in tobacco smoke have the capability to damage or modify the DNA. When this DNA gets damaged, the cells begin to divide out of control and create a cancerous tumour.

Smoking causes a majority of lung cancers. As mentioned above, smoking can induce a tumour in almost any part of the body. Moreover, it's not just the smoke; even smokeless tobacco also causes cancer of the mouth, oesophagus and pancreas.

There have been a number of studies which conclude that smoking reduces a woman's chance of getting pregnant and increase the risk of complications during pregnancy. Tobacco smoke harms babies before and after they are born. This is because smoking during pregnancy damages the tissue in the unborn baby. This tissue damage takes place mainly in the lungs and brain. Moreover, there have been connections between tobacco and miscarriages in several studies. Tobacco smoke produces carbon monoxide, which prohibits the oxygen from reaching the developing baby.

Smoking can undoubtedly affect bone health, as well. Women who smoke have weaker bones than the ones who do not smoke. They are also at higher risk for breaking their bones easily. Moreover, smoking regularly also deteriorates the health of teeth and gums. It may also cause tooth loss.

In some studies, it was found that smoking was also responsible for exposing an individual towards a cataract. Cataract refers to the clouding in the eye lens, which makes vision blurred. Smoking can also cause age-related macular degeneration. In this disease, there is damage at a small spot the other centre of the vagina, which is needed for central vision.

Apart from its hazardous effects on the other organs, smoking is also a cause of type 2 diabetes mellitus. The risk of developing diabetes in smokers is generally higher than non-smokers. Smoking has also been found to be a causative agent of rheumatoid arthritis. Moreover, it decreases the immune response and exposes the body towards several sicknesses.